If you’re a Sherlock Holmes fan you’ve probably heard of (or own) the book “The Sherlock Holmes Puzzle Collection: 150 enigmas for you to solve, inspired by the world’s greatest detective”. Well, guess what? It turns out there’s a very similar (but still very different) Bulgarian book by author Nikolai Penchev. It’s called “Старобългарски загадки” (“Bulgar mysteries”) and it’s actually part of a book series by the same name. You can check out the rest of the series here: Старобългарски загадки series.

The book follows the adventures of the royal clerk Clement, whom the readers may already know from the eponymous “Bulgar mysteries” series, as he unravels some very complex cases. Unlike the other books from the series this one feels more like a game as it challenges the reader to solve the mysteries alongside the protagonist. It is by no means a textbook – some of the “facts” are not historically true and are simply a fruit of fiction. Nevertheless, the book is a great way to spark young readers’ interest towards the chronicles of the First Bulgarian Kingdom. A huge contribution to this has the beautiful artwork of illustrator Boyan Yanev and the perfect polygraph execution. The book is hardcover and has 248 pages.

The third part of the new mystery novel deserves a special attention as it is dedicated to the rescuing of the magnificent ceramic icon of St. Theodore Stratilat. Drawn by the talented illustrator Boyan Yanev, it resembles perfectly one of the most valuable artifacts in the collection of the National Archaeological Museum in Sofia. Of course the story of the abduction of the icon is fiction. In the novel the icon is stored in a monastery – a former fortress surrounded by a three-meter ditch in the center of a wiry fence maze. In order to get to St. Theodore Stratilat one must pass through a divided by squares hall where every misstep can trigger some kind of hidden mechanism. 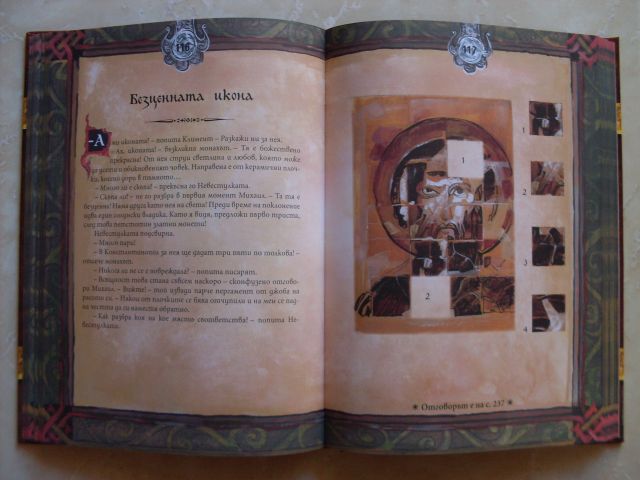 The puzzle-like novel contains over 100 riddles – riddles, brain teasers, puzzles and mazes whose logical reasoning and answers can be found at the end of the book. The characters embark on a search for a missing gospel, a lost treasure, an abducted icon and  a murder investigation in a sacred temple. The adventure requires wisdom, insight, resourcefulness and vigilance so as not to destroy their own lives. The solving of the mysteries is key to the development of the plot, so if you cannot solve them alone you can always look at the answers at the back. All of the sketches, maps and drawings help the reader to vividly imagine the world of the novel. Some of the mysteries may sound quite abstract but their purpose is to teach you to ponder beyond stereotypes and beyond the literal condition of the presented tasks.

As the story of St. Theodore Stratilat’s icon is so enticing and exciting here are some facts and conundrums about the original ceramic icon – exhibit at the National Archaeological Museum that inspired the kidnapping story in the third part of “Bulgar mysteries”:

For any Bulgarians who might stumble upon this blog post here’s a short video material about the book from the Bulgarian National Television’s (BNT) archive: VIDEO.

Also, here’s some music to get you in the mood:

P.P.S. Long time no see. This was not a very easterly easter post, don’t mind me, I love you, bye.

Now lets entirely ruin the aesthetic of this non-easter blog post and treat ourselves with THE SHERHOP. *Bunnydict Carrotpatch* I mean…

Hi Ho, guys! I have a pretty cool post for you today. ^_^ So, what’s the big deal? Well, if you are a Sherlock Holmes enthusiast you probably melt every time you hear the sound of a violin. *I know I do*

So the other day I was watching the news when something truly meant for this blog came up on the screen. I think I have mentioned in a previous post that I’m from Bulgaria. So guess what?! Turns out one of the most famous violin makers who creates the most awesome, badass violins you have ever seen lives here, in Bulgaria! How cool is that?! *-*

Guy’s name is Jeff Stratton and he lives and makes his magic in Varna – the largest city and seaside resort on the Bulgarian Black Sea Coast. His violins are unique and inimitable – with skulls, strange figures and amazing decorations.

May I just say:

“While I was making a violin one time I accidentally broke it, I made a hole in it. But rather than just fix it, I continued to make it even more bizarre and strange. I showed it to a guy and he said “Oh my God” and bought it”, said Stratton. *insert ‘shut up & take my money’ meme here*

Since then, his violins cause unprecedented interest among musicians around the world – from Japan to America and from Europe to Australia.

Jeff was born in Ohio but now lives in Varna and is married to a Bulgarian. He was strongly connected with music from infancy: “In my youth I was very good with the violin. But if you want to play professionally you have to give it all you got, you need to just go for it. It’s a lot of hard work, that’s for sure.”, he says and adds that the process of making the violins brings him much more joy.

For his violins Jeff mainly uses linden and maple. According to him, the quality of the Bulgarian lime is the best in the world.🇧🇬 He points out that he never has a plan when he starts making a new violin – he just goes for it and probably that’s why his works are absolutely unique and inimitable.

I want to show you the whole range Stratton Violin offers just because they are all so freaking beautiful!

First we have the THE SEMI – CUSTOM BODY:

These bodies are hand carved and detailed…not a one is exactly the same.

Then THE STANDARD BODY:

This is the production model of the line of violins. It is also available with custom finishes.

A Classic Violin Body with an edge. Hand carved and distressed for the old wood look. 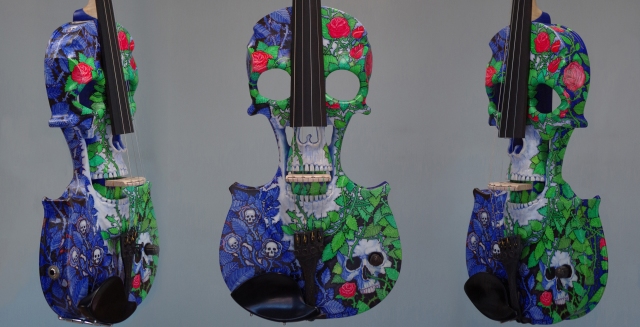 They speak for themselves… they are out of this world. Each violin is a one of a kind master piece. Hand painted, signed, and numbered.

And last but by no means least THE ROBERT KANTOR BODY: 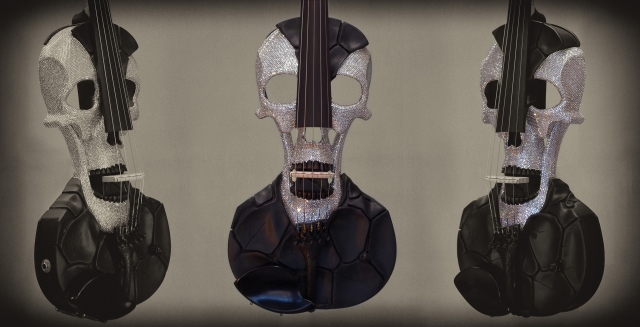 And a glimpse of the working process:

What do you think? Is there anyone who can actually play the violin? Or do you play any musical instrument at all? Let me know in the comments below! Also, which one of the violins would you like to possess? (It’s perfectly fine if you want them all, I feel you…and I don’t even play…if I had one I would probably just stare at it in awe till I die…😂) Lets fangirl/fanboy or just *fan* in the comments together!

Ahahahaha!!! I cannot!😂 Who made this?!😂 Sherlock meets The Road to El Dorado – too epic!😂

"The world is full of obvious things which nobody by any chance ever observes."